Who should get the credit for the Invention?

When does the Invention occur?

How does the Invention happen?

As they walked along the shore, two very competitive guys: both “filthy rich” by anyone’s standard, both had disrupted established giant corporations, and created their own companies, changing the world significantly.

He pulled him close such that they went nose to nose

“Larry, this is why it’s really important that I’m your friend.  You don’t need any more money.”

Both were kind of inventors, but they were different in Temperament, and completely different goals in life.  Larry is a Promoter Artisan and he keeps score by money: his interest was in winning.  He loved the fact that he used IBM’s own research to beat them in database software, making himself fabulously wealthy.

For Steve, he was competitive in a completely different way. It wasn’t about the money or the winning.  Rather, it was about his legacy: his company.

He hadn’t changed his passion. Long ago, he had seen a way to start making cool things, inventions, that were useful, that he wanted to use — like he had started several decades before with another friend, the Woz.

Woz was completely different from Steve too, just as Larry Ellison was, but they where the same Temperament.  They, Steve Jobs and Steve Wozniak, were both Inventor Rationals, but still they had different ways of inventing, and it took the two together to invent the Apple Computer Corporation:  now just plain APPLE INC., bigger than Microsoft and bigger than IBM, bigger than Larry’s Oracle. 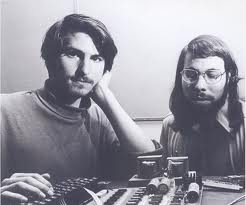 Steve Jobs explains some of the early history of Apple Computer

Nikola Tesla was most important inventor in the last century, but his competitor, Thomas Edison was more prolific in the number of patents because he industrialize invention.  The modern inventors of digital products are more like the latter kind of inventor, because the devices are very complex and no one person can make the invention of these products alone.

Steve Wozniak is more of “engineering” inventor, like Tesla.  Jobs was more on the Edison mold.  However, Genius is as Genius does.  Steve Jobs was able to take ideas on how to do things, models, and other inventors, like the Woz, to make a complicated invention: to create a complete product that others wanted, and would pay for.

Moreover, he began to want more.

He wanted an innovative company.  A company which reinvented itself.  A company that would last after his death.

Strategic Collaborators [Inventor Rationals] will get results. It’s imperative that they do; they must get results; they have to get results, they are compelled by their very nature to do so. If what they do doesn’t get results, then they adapt their ways and means, and continue doing so until they do achieve intended results. Thus they will adapt their usage of words and tools in whatever way necessary to get the results they want. And, this pragmatic approach to operations continues, no matter how long it takes to get results. For Modelers [Inventor Rationals], as with other Rationals, it is a matter of willpower. [Personology, page 297]

Steve Jobs had willpower.  Steve Jobs became obsessed; he was a perfectionist.  He was a master of integrating art with technology.  He was best at Functional Design.

“It can’t be done” is a challenge to a Modeler  that elicits an automatic “It can be done!” There is often an astonishing persistence that shows up when in structuring some tool the Modeler will continue to fiddle with some obstacle until, low and behold, he goes around it and proceeds blithely to build his tool. Then comes the “blue sky heuristic,” that strange method of going off in another direction, sometimes directly away from the goal, to stumble upon a way of getting around, over, or underneath the obstacle. Modelers, it would seem, avail themselves of this approach far more than the other Rationals.”  [Personology pages 298-299].

With their innovative, entrepreneurial spirit, Inventors are always on the lookout for a better way, always eyeing new projects, new enterprises, new processes. Always aiming to “build a better mousetrap.”   Inventors are keenly pragmatic, and often become expert at devising the most effective means to accomplish their ends. They are the most reluctant of all the types to do things in a particular manner just because that’s the way they have been done. As a result, they often bring fresh, new approaches to their work and play. They are intensely curious and continuously probe for possibilities, especially when trying to solve complex problems. Inventors are filled with ideas, but value ideas only when they make possible actions and objects. Thus they see product design not as an end in itself, but as a means to an end, as a way of devising the prototype that works and that can be brought to market. Inventors are confident in their pragmatism, counting on their ability to find effective ways and means when they need them, rather than making a detailed blueprint in advance. A rough idea is all they need to feel ready to proceed into action. [Please Understand Me II]

The Master of Innovation

The progressive development of man is vitally dependent on invention. It is the most important product of his creative brain. Its ultimate purpose is the complete mastery of mind over the material world, the harnessing of the forces of nature to human needs. This is the difficult task of the inventor who is often misunderstood and unrewarded. But he finds ample compensation in the pleasing exercises of his powers and in the knowledge of being one of that exceptionally privileged class without whom the race would have long ago perished in the bitter struggle against pitiless elements. . . .  Nicola Tesla

It’s not about charisma and personality, it’s about results and products and those very bedrock things that are why people at Apple and outside of Apple are getting more excited about the company and what Apple stands for and what its potential is to contribute to the industry.

27 thoughts on “The Inventor”