They don’t believe her. 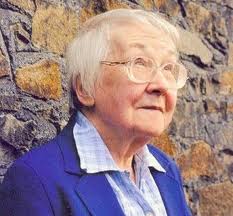 despite her iron-clad scientific explanation of The Aquatic Ape Hypothesis.

Who is this old lady, with no degree in science, telling the established, credentialed, tenured, academic paleoanthropologists that what they accepted and endorsed as the how mankind became different from other primates — was wrong. Badly wrong. Stupid wrong.

Who is she?  She is a Maverick.  She, who learned science on her own: perfecting and building a solid scientific theory from an interesting guess (hypothesis) put forth by Alister Hardy, and with no help from those paleoanthropologists, luckily.

I won’t listen to the experts, ever again — Richard Feynman

Elaine Morgan, Inventor Rational, as teenager went into the arts because she had gotten a scholarship. She was interested in words — etymology (the fancy Latin word for it).  She was very bright and creative, and did very well as a writer.

They [Inventor Rationals] are the most reluctant of all the types to do things in a particular manner just because that’s the way they have been done. As a result, they often bring fresh, new approaches to their work and play. They are intensely curious and continuously probe for possibilities, especially when trying to solve complex problems. [Please Understand Me II]

She was an award winning writer.

Elaine Morgan began writing in the 1950s after winning a competition in Statesman, successfully publishing, then joining the BBC when they began produce her plays for television. Morgan’s works include popular dramas, and newspaper columns.

Morgan has written for many television series including the adaptations of How Green Was My Valley (1975) and Testament of Youth (1979). Her other work includes episodes of Dr. Finlay’s Casebook (1963–1970), the biographical drama The Life and Times of David Lloyd George (1981) and contributions to the Campion series (1989)

She has won two BAFTAs and two Writers’ Guild awards. She won the Prix Italia in 1975. She was honoured with the Writer of the Year Award from the Royal Television Society for her series of Testament of Youth.  [Wikipedia]

However, she always had an interest in science, even as a little kid.  So, when Desmond Morris mentioned an obscure reference to Hardy’s work, she pursued it, to possibly counter the “Alpha Male” (or tenured faculty, Paleoanthropologists) explanation of human evolution.  Elaine Morgan, who had never bought into the unquestioned Savannah Hypothesis, perked up when Hardy hypothesis was mentioned.

I would certainly never have heard of it but for a reference to it in Desmond Morris’s The Naked Ape. Desmond, who knew and admired Alister, gave a brief account of the theory, but concluded that if there had been an aquatic interlude, its effects were probably minimal. The big story, the true story, was still the exodus onto the plains.

But when I read that passage, it came as a revelation. To me it made more sense than anything else in the book. This was at the beginning of the seventies, and I had started writing a book of my own, with a feminist message. Its theme was that all the current books on human evolution were written from a male standpoint. Some of the changes allegedly designed to make the male a better hunter would have had unfortunate consequences for his mate and her offspring. A female primate in the middle of an African plain would not be better equipped to find food, or to escape from predators, by becoming naked and bipedal. That would involve having to carry everywhere in her arms, while foraging or running away, a large and particularly helpless slow-growing infant that could no longer travel astride her back, nor cling to her fur so as to leave her own hands free. I preferred the aquatic hypothesis. I wrote to Sir Alister, asking for and receiving permission to follow up the suggestion he had made.” [The Naked Darwinist, Elaine Morgan]

She started slow, assuming that eventually maybe an ambitious graduate student would take up the idea.

Her first book The Descent of Woman (1972) was originally planned to pave the way for Hardy’s more academic book, but Hardy never published his book. Morgan’s first publication was mentioned by E. O. Wilson in 1975, comparing it to other ‘advocacy approaches’ such as The Imperial Animal as an ‘inevitable feminist’ counter, but describing the method as less scientific than other contemporary hypotheses. She accepted this criticism and so her later books were written on more scientific basis or more “po-faced” as she herself described it. [Wikipedia]

“During the last few years, when I have found myself in the company of distinguished biologists, evolutionary theorists, paleoanthropologists and other experts, I have often asked them just to tell me, please, exactly why Elaine Morgan must be wrong about the aquatic theory. I haven’t yet had a reply worth mentioning, aside from those who admit, with a twinkle in their eyes, that they have also wondered the same thing.”  – Daniel Dennett