“Not for ourselves alone are we born.” — Cicero

They never saw the day.  But they knew it would happen.

Their herculean efforts had a purpose.  They knew that — the women of a newer generation, and the nation and the world, would see the fruits of their labors.

They were an unbeatable team: a pair that was much bigger than the sum of their parts: Die Gestalt.

And their idea was bigger than them too.

It was audicious idea at the time.

The Declaration of Sentiments.

Modeled on the Declaration of Independence.

A very abstract vision of the future in 1848.

“When, in the course of human events, it becomes necessary for one portion of the family of man to assume among the people of the earth a position different from that which they have hitherto occupied, but one to which the laws of nature and of nature’s God entitle them, a decent respect to the opinions of mankind requires that they should declare the causes that impel them to such a course.

We hold these truths to be self-evident: that all men and women are created equal; that they are endowed by their Creator with certain inalienable rights; that among these are life, liberty, and the pursuit of happiness; that to secure these rights governments are instituted, deriving their just powers from the consent of the governed…”

Elizabeth had ADVOCATED it.  She had wrote it. She CHAMPIONED it.  But, the question became how would this abstract vision come about?

Declaration had been signed only by 68 women and 32 men out of the 300 who attended, and the question was who would do something about it.

Saying and doing are quite different.  Elizabeth needed help.

“How well I remember the day! George Thompson and William Lloyd Garrison having announced an anti-slavery meeting in Seneca Falls, Miss Anthony came to attend it. These gentlemen were my guests. Walking home after the adjournment, we met Mrs. Bloomer and Miss Anthony, on the corner of the street, waiting to greet us.” 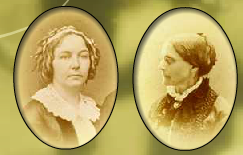 Elizabeth Cady Stanton had found a kindred spirit in Susan B Anthony.

“When we were digging together. When she forged the thunderbolts and I fired them.”  — Susan Anthony

They were very different.  In fact they nicely complemented each other.  Stanton Championed the cause with her writing.  Anthony Masterminded the cause by traveled tirelessly, coordinating and giving lectures though out the United States.

Elizabeth was the first to advocate (to give voice) the vote for women.  She devoted her life to cause, while raising six children.  She couldn’t have done it without the support of Anthony.

Like the other Idealists, Champions are rather rare, say three or four percent of the population, but even more than the others they consider intense emotional experiences as being vital to a full life. Champions have a wide range and variety of emotions, and a great passion for novelty. They see life as an exciting drama, pregnant with possibilities for both good and evil, and they want to experience all the meaningful events and fascinating people in the world. The most outgoing of the Idealists, Champions often can’t wait to tell others of their extraordinary experiences. Champions can be tireless in talking with others, like fountains that bubble and splash, spilling over their own words to get it all out. And usually this is not simple storytelling; Champions often speak (or write) in the hope of revealing some truth about human experience, or of motivating others with their powerful convictions. Their strong drive to speak out on issues and events, along with their boundless enthusiasm and natural talent with language, makes them the most vivacious and inspiring of all the types. [Please Understand Me II]

Elizabeth inspired Susan to be the driving force of Woman’s Suffrage Movement. 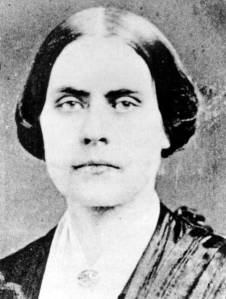 Susan Brownell Anthony, Mastermind Rational, (February 15, 1820 – March 13, 1906) was a prominent American civil rights leader who played a pivotal role in the 19th century women’s rights movement to introduce women’s suffrage into the United States. She was co-founder of the first Women’s Temperance Movement with Elizabeth Cady Stanton as President.  She also co-founded the women’s rights journal, The Revolution. She traveled the United States and Europe, and averaged 75 to 100 speeches per year.  She was one of the important advocates in leading the way for women’s rights to be acknowledged and instituted in the American government. [Wikipedia, revised]

“Mrs. Stanton was the brains of the new association, while Miss Anthony saw herself merely its hands and feet; but in truth the two women worked marvelously together, for Mrs. Stanton was a master of words and could write and speak to perfection of the things Susan B. Anthony saw and felt but could not herself express.”

In their careers, Masterminds usually rise to positions of responsibility, for they work long and hard and are dedicated in their pursuit of goals, sparing neither their own time and effort nor that of their colleagues and employees. Problem-solving is highly stimulating to Masterminds, who love responding to tangled systems that require careful sorting out. Ordinarily, they verbalize the positive and avoid comments of a negative nature; they are more interested in moving an organization forward than dwelling on mistakes of the past. [Please Understand Me II]

This sounds like a synergic pair, don’t you think?  Elizabeth Cady Stanton and Susan B Anthony spearheaded a movement that took 72 years to come to fruition. But the fruits of their labors was not for themselves, together, Stanton died in 1902 and Anthony in 1906.  Women won the right to vote in 1920.

With the meeting of Stanton, Susan B. Anthony became the driving force of woman suffrage for the next four decades, traveling widely and constantly to promote the cause virtually until her death,  bringing one generation of younger women after another into the movement. She indisputably earned the posthumous honor of having the Nineteenth Amendment, which granted American women the vote, named after her.

The moment we begin to fear the opinions of others and hesitate to tell the truth that is in us, and from motives of policy are silent when we should speak, the divine floods of light and life no longer flow into our souls.

12 thoughts on “Not For Ourselves, Together”