In the Heart of Darkness and Light

“It is the most relentlessly fucked-over nation in the world, yet it has long been my dream to see Congo. And for my sins, I got my wish.” Bourdain starts the episode off on a dramatic note as he tries to recreate his favorite book, Heart of Darkness.

On June 8, 2018, he committed suicide while on location in France for Parts Unknown.  The suicide appeared to be an “impulsive act“.

Anthony Michael Bourdain, Artisan, ( June 25, 1956 – June 8, 2018) was an American celebrity chef, author, travel documentarian, and television personality who starred in programs focusing on the exploration of international culture, cuisine, and the human condition. He was considered one of the most influential chefs in the world. 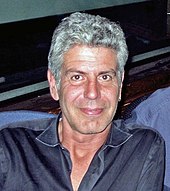 Drew Magary, in a column for GQ, reflected that Bourdain was heir in spirit to Hunter S. Thompson. The Smithsonian Institution declared Bourdain “the original rock star” of the culinary world, while his public persona was characterized by Gothamist as “culinary bad boy”. Due to his liberal use of profanity and sexual references in his television show No Reservations, the network added viewer-discretion advisories to each episode

Artisans want to be where the action is; they seek out adventure and show a constant hunger for pleasure and stimulation. They believe that variety is the spice of life, and that doing things that aren’t fun or exciting is a waste of time. Artisans are impulsive, adaptable, competitive, and believe the next throw of the dice will be the lucky one. They can also be generous to a fault, always ready to share with their friends from the bounty of life. Above all, Artisans need to be free to do what they wish, when they wish. They resist being tied or bound or confined or obligated; they would rather not wait, or save, or store, or live for tomorrow. In the Artisan view, today must be enjoyed, for tomorrow never comes. [Please Understand Me II]

The Documentary Series, Parts Unknown, found Bourdain at the peak of his ability to convey a sense of place and community and connection over meals.  The show was filmed and is set in places as diverse as Libya, Tokyo, the Punjab region, Jamaica, Cambodia,  Los Angeles, Turkey, Ethiopia, Hong Kong, Nigeria, Far West Texas, Vietnam, London, the Bronx, and Armenia.

“Ennui” is how the Artisans become “depressed.”

Excitement (which may include simple restlessness) is not the end most ardently sought by the Artisans, but it can serve as a kind of substitute for spontaneity. To be deprived of their impulses is to be caught in a living death, so they will do almost anything to escape this ennui. The Artisan “ennui” is akin to boredom — they find themselves in grey and fog filled landscape, they are beguiled. To them, they feel in their gut, nothing exciting will ever happen again. It scares the Artisan…

Whether in Detroit or Colombia, New Jersey or Vietnam, Bourdain’s allegiances were clear; he gravitated to people dealt a bad hand by history, the victims of unjust political and economic structures. But he never let them just be victims. In the interior of the Democratic Republic of Congo, he finds a man who maintains an old library that has long since stopped receiving funding from the state. The librarian makes sure the grass is mowed, the floors swept, and the books kept in order even as they disintegrate around him. Bourdain is clearly moved by his seemingly Sisyphean work. The lush cinematography lingers on the fraying bindings, the decaying machinery, and the advancing damp, but it also takes in the palpable neatness of the man’s desk and the grace of his quiet resolve.