Don’t ask me what I did.  Ask what I did not do.
I did not clip her wings.
— Ziauddin Yousafzai 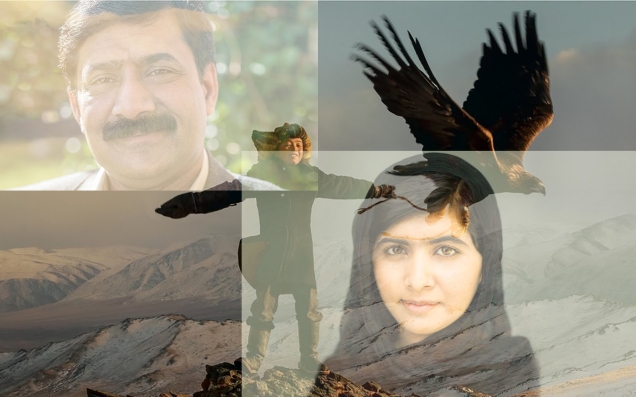 Ziauddin Yousafzai, Teacher Idealist, is the father of Malala Yousafzai, a young woman who protested against the Taliban for the education rights of children, especially for Pakistani girls. Originally a headmaster of his school in Swat Valley, he is currently the United Nations Special Advisor on Global Education.

Malala Yousafzai, Fieldmarshal Rational, ( born 12 July 1997) is a Pakistani school pupil and education activist from the town of Mingora in the Swat District of Pakistan’s northwestern Khyber Pakhtunkhwa province. She is known for her activism for rights to education and for women, especially in the Swat Valley, where the Taliban had at times banned girls from attending school. In early 2009, at the age of 11–12, Yousafzai wrote a blog under a pseudonym for the BBC detailing her life under Taliban rule, their attempts to take control of the valley, and her views on promoting education for girls. The following summer, a New York Times documentary by journalist Adam B. Ellick was filmed about her life as the Pakistani military intervened in the region, culminating in the Second Battle of Swat. Malala rose in prominence, giving interviews in print and on television, and she was nominated for the International Children’s Peace Prize by South African activist Desmond Tutu. [Wikipedia, revised]

“I will get my education – if it is in home, school, or anyplace.”
— Malala

As Malala became more recognized, the dangers facing her became more acute. Death threats against her were published in newspapers and slipped under her door. On Facebook, where she was an active user, she began to receive threats and fake profiles were created under her name. When none of this worked, a Taliban spokesman says they were “forced” to act. In a meeting held in the summer of 2012, Taliban leaders unanimously agreed to kill her.
END_OF_DOCUMENT_TOKEN_TO_BE_REPLACED