His singing was gravelly and raspy.

He hadn’t been allowed in the front door of opportunity.

I see trees of green…….. red roses too
I see em bloom….. for me and for you
And I think to myself.… what a wonderful world.

He had worked hard all his life.

But he didn’t care

His work was fun, for he was the ultimate Entertainer.

He sang and played in a wonderful world.

I see skies of blue….. clouds of white
Bright blessed days….dark sacred nights
And I think to myself …..what a wonderful world.

For a man who knew the Blues…  The Blues of the Segregrated South.

And Boy, that man could blow that Gabriel horn.

Where in the world did all that Jass come from?

Nobody knows when the word Jass came be the word for that music and why it changed to Jazz, but Jazz was born in New Orleans. A mixture of all kinds of musical worlds, including the blues. And that music had something wonderful to it, exciting, entertaining, and improvisational.

Satchmo was born in that center of that world when it was just forming — he said he was born on July 4, 1900.  But Satch was given to stories, he probably made them up on the fly, to make them more entertaining.

“Jazz is restless. It won’t stay put and it never will” and Louis Armstrong, a Performer Artisan, nicknamed Satchmo, didn’t either. 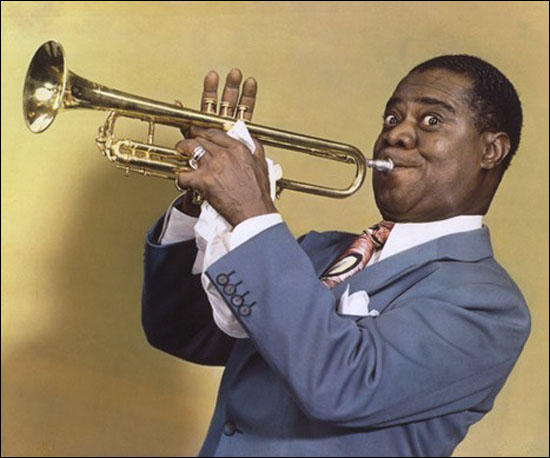 Coming to prominence in the 1920s as an “inventive” cornet and trumpet player, Armstrong was a foundational influence in jazz, shifting the focus of the music from collective improvisation to solo performance. With his instantly recognizable deep and distinctive gravelly voice, Armstrong was also an influential singer, demonstrating great dexterity as an improviser, bending the lyrics and melody of a song for expressive purposes. He was also greatly skilled at scat singing (vocalizing using sounds and syllables instead of actual lyrics).

Renowned for his charismatic stage presence and voice almost as much as for his trumpet-playing, Armstrong’s influence extends well beyond jazz music, and by the end of his career in the 1960s, he was widely regarded as a profound influence on popular music in general. Armstrong was one of the first truly popular African-American entertainers to “cross over”, whose skin-color was secondary to his music in an America that was severely racially divided. He rarely publicly politicized his race, often to the dismay of fellow African-Americans, but took a well-publicized stand for desegregation during the Little Rock Crisis. His artistry and personality allowed him socially acceptable access to the upper echelons of American society that were highly restricted for a black man.

New Orleans was an early melting pot for American culture. With all nationalities, races, religions, and cultural backgrounds having gathered and mixed there in the 1800’s — New Orlean’s unique combination of French, Spanish, Caribbean, Italian, German, and many other groups had created a uniquely American music by beginning of the twentieth century.

Louie had from the beginning soaked up and imbibed in this rich musical form.

Performers are smooth, talkative, and witty; they always seem to know the latest jokes and stories, and are quick with wisecracks and wordplay —  nothing is so serious or sacred that it can’t be made fun of. Performers also like to live in the fast lane, and seem up on the latest fashions of dress, food, drink, and music. Lively and uninhibited, Performers are the life of the party, always trying to create in those around them a mood of eat, drink, and be merry.

The Performers’ talent for enjoying life is healthy for the most part, though it also makes them more subject to temptations than the other types. Pleasure seems to be an end in itself for them, and variety is the spice of life. And so Performers are open to trying almost anything that promises them a good time, not always giving enough thought to the consequences. [Please Understand Me II]

He could have easily fallen victim to his environment for besides the rich musical forms, there were other delights of the senses existed in New Orleans, some that his father did imbibe in. 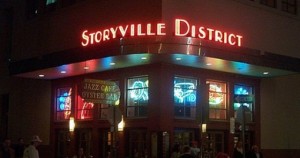 Armstrong was born into a very poor family in New Orleans, the grandson of slaves. He spent his youth in poverty, in a rough neighborhood of Uptown New Orleans, known as “Back of the Town”, as his father, William Armstrong  abandoned the family when Louis was an infant and took up with another woman. His mother, Mary “Mayann” Albert  then left Louis and his younger sister Beatrice in the care of his grandmother, Josephine Armstrong, and at times, his Uncle Isaac. At five, he moved back to live with his mother and her relatives, and saw his father only in parades.

He attended the Fisk School for Boys, where he likely had early exposure to music. He brought in some money as a paperboy and also by finding discarded food and selling it to restaurants, but it was not enough to keep his mother from prostitution. He hung out in dance halls close to home, where he observed everything from licentious dancing to the quadrille. For extra money he also hauled coal to Storyville, the famed red-light district, and listened to the bands playing in the brothels and dance halls, especially Pete Lala’s where Joe “King” Oliver performed and other famous musicians would drop in to jam.

After dropping out of the Fisk School at age eleven, Armstrong joined a quartet of boys who sang in the streets for money. But he also started to get into trouble. [Wikipedia, revised]

Somehow he was introduced to the cornet.  The rest is history.  A natural Performer, Louie Armstrong learned to play the cornet, became brilliant at it and all that jazz… and served as an American musical ambassador to the world, ever since.

Like the other Artisans, Performers are incurably optimistic – “Always look on the bright side,” is their motto — and they will avoid worries and troubles by ignoring them as long as possible. They are also the most generous of all the types, and second only to the Composer Artisans [ISFPs] in kindness. Performers haven’t a mean or stingy bone in their body-what’s theirs is yours-and they seem to have little idea of saving or conserving. They give what they have to one and all without expectation of reward, just as they love freely, and without expecting anything in return. In so many ways, Performers view life as an eternal cornucopia from which flows an endless supply of pleasures. [Please Understand Me II]

Armstrong hardly looked back at his youth as the worst of times but instead drew inspiration from it, “Every time I close my eyes blowing that trumpet of mine—I look right in the heart of good old New Orleans… It has given me something to live for.”

New Orlean’s Jazz music style combined earlier brass band marches, French Quadrilles, ragtime and blues with collective, polyphonic improvisation. While instrumentation and size of bands can be very flexible, the “standard” band consists of a “front line” of trumpet (or cornet), trombone, and clarinet, with a “rhythm section” of at least two of the following instruments: guitar or banjo, string bass or tuba, piano, and drums.

Armstrong had many hit records including “Stardust“,  “When The Saints Go Marching In“, “Dream a Little Dream of Me“, “Ain’t Misbehavin’“, “You Rascal You,”and “Stompin’ at the Savoy.” “We Have All the Time in the World” was featured on the soundtrack of the James Bond film On Her Majesty’s Secret Service, and enjoyed renewed popularity in the UK in 1994 when it featured on a Guinness advertisement. It reached number 3 in the charts on being re-released.

In 1968, Armstrong scored one last popular hit with the highly sentimental pop song “What a Wonderful World”

The colors of a rainbow…..so pretty ..in the sky
Are there on the faces…..of people ..going by
I see friends shaking hands…..sayin.. how do you do
They’re really sayin…*spoken*(I ….love….you).

…….what a wonderful world.

4 thoughts on “What a Wonderful World”