Be Beautiful, Brilliant, and Bold

Hedwig Kiesler, was declared the “most beautiful women in the world,” but she quickly got bored of the sobriquet.  She did not play the Hollywood game.  She spent many of her evenings creating.  But few would know, what she was creating for it was classified as secret for 40 years.

Six different husbands.  All married her for different reasons.  But not any like her father.  He loved his daughter for her intelligence, not for her beauty.  It was he, who encouraged her to ask how things work, which gave her a supreme self confidence even by the tender age of 15.  “I must make my own decisions.  Mould my own character, think my own thoughts.”

“My mother always called me an ugly weed, so I never was aware of anything until I was older. Plain girls should have someone telling them they are beautiful. Sometimes this works miracles.” 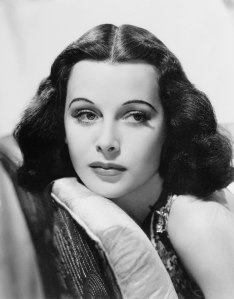 Born in Vienna in 1913, Hedwig Eva Maria Kiesler, aka Hedy Lamarr, always wanted to be an movie star. She saw it as being creative.

She studied ballet and piano at age 10. When she worked with Max Reinhardt in Berlin, he called her the “most beautiful woman in Europe”. Soon the teenage girl was playing major roles in German movies alongside stars like Heinz Rühmann and Hans Moser.

Reinhardt’s play, A Weaker Sex, her first play, Hedy knew what she wanted and knew how to get it.  She had gotten the part in Berlin and when Reinhardt moved the play to Vienna, she strategically followed and got the part again.  Her fellow actor, George Weller, an American, figured he would make an American out of her and teach her English, since her part in the play was as an American. Hedy was very eager:  Hollywood was a beacon.

“She was eager to be transformed. ‘Hedy had only the vaguest ideas of the United States were,’ Weller discovered, ‘except they were grouped around Hollywood.” [Hedy’s Folly, by Richard Rhodes]

Ekstase (Ecstasy).  “I’ve never been satisfied, she explained, I’ve no sooner done one thing, then I am seething inside me to do another thing.”  Seeing her work in Berlin, Czech director Gustave Machaty, offered her the lead in his film the love story: Ekstase.  The film was a sensation, scandalous, and challenged convention.  Reversing roles of  men and women, releasing people for a newer, healthier freedom.

In Europe and America, the old ways wanted women to be seen but not heard.  Hedy wanted her independence and her career.

She learned the hard way with her first marriage.  Friedrich Mandl was a powerful, very rich and canny businessman.  “Hedy’s model of man was her father, if her father was frigate, Mandl was a battleship.”  Hedy said “Mandl knew everything and had everything.” Married at 19, Hedy soon found herself locked in a golden and guilded prison: “I was a thing, some object of art which had to be guarded — and imprisoned — having no mind, no life of its own.”

She finally escape from Europe, from the gathering storm of war, and from her guilded cage.  She strategically landed on the shores of America with a very lucrative contract from Louis B Mayer, the stingy, crass fatherly figure that was in control of Metro, Godwyn, Mayer (MGM)  movie studios in Hollywood.  Fame followed, for it was the golden age of movie making and the Studio system in Hollywood.  And she was touted as “the most beautiful woman in the world” by Mayer.

But she soon was bored in Tinsel Town.  Hollywood parties, and those people who flocked to them, were not very interesting.  Without stimulating conversation, Hedy preferred to spend her evening time on “her inventions.”   You see, Hedy Lamarr was an Inventor Rational.

“She had a ‘drawing room’  filled both with unreadable books and very useable drawing boards that look as if they are in constant use.  …   Believe it or not,  Hedy Lamarr stays home nights and invents!  — George Antheil (Hedy’s co-inventor and patent holder of US Patent 2292387: Secret Communication System.)

They are intensely curious and continuously probe for possibilities, especially when trying to solve complex problems. Inventors are filled with ideas, but value ideas only when they make possible actions and objects. Thus they see product design not as an end in itself, but as a means to an end, as a way of devising the prototype that works and that can be brought to market.

Inventors are usually non-conformists in the workplace, and can succeed in many areas as long as the job does not involve too much humdrum routine. They make good leaders on pilot projects that test their ingenuity. And they are skilled at engineering human relationships and human systems, quickly grasping the politics of institutions and always wanting to understand the people within the system rather than tell them what to do. No matter what their occupation, however, Inventors display an extraordinary talent for rising to the demands of even the most impossible situations. “It can’t be done” is a challenge to an Inventor and elicits a reaction of “I can do it.”

One can speculate on what those  “unreadable books” were about, but clearly Hedy was underestimated even by her co-inventor of that Patent 22923387.  Without a doubt those engineering books with formulas and equations, weren’t there to look pretty. She read those books.  Hedy Lamarr had the intelligence and drive to not only understand how things worked but also able to engineer and design very complex mechanisms in her own mind.  She had enough intelligence to “stand still and look stupid” — and invent  — to think completely a new thought that nobody had thought of before – Frequenzsprungverfahren.  That is, “frequency hopping” or in 40 years later terminology “spread spectrum technology”  — the basis of all cell phone communication of 21st century.

“Films have a certain place in a certain time period. Technology is forever.”   — Hedy Lamarr

It was no small wonder Hedy Lamarr’s other five marriages did not endure.  Those guys in and around Hollywood never understood or valued Hedy for her intellect, and never were able to stand up to her model of a perfect mindmate as she experience with her father.

I am not ashamed to say that no man I ever met was my father’s equal, and I never loved any other man as much..