She was born a Natural.

Born when it wasn’t natural.

“Mathematics are the natural bent of my mind”
— Mary Somerville 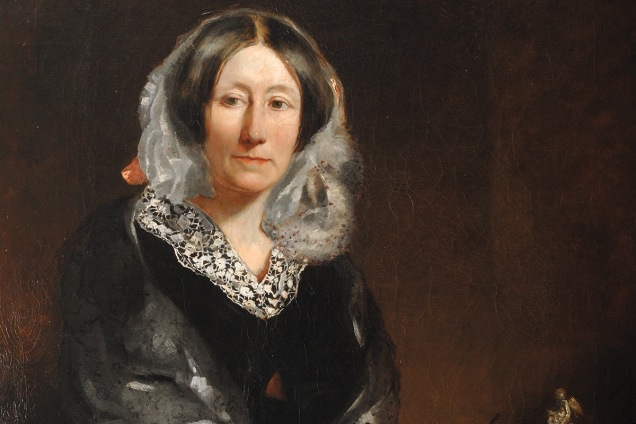 It was in her nature to be a scientist — damn the culture.

In fact, she was to become the first named scientist.  William Whewell, in his 1834 review of Somerville’s Connexion, coined the word “scientist” to describe Somerville.

Her mother taught her to read the Bible and Calvinist catechisms, and when not occupied with household chores Mary roamed among the birds and flowers in the garden.  In her autobiography Somerville recollects that after returning from sea her father said to her mother “This kind of life will never do, Mary must at least know how to write and keep accounts”. Thus the 10-year-old was sent for a year of tuition at Musselburgh, an expensive boarding school. Somerville learned the first principles of writing, rudimentary French and English grammar. Upon returning home, she:

“…was no longer amused in the gardens, but wandered about the country. When the tide was out I spent hours on the sands, looking at the star-fish and sea-urchins, or watching the children digging for sand-eels, cockles, and the spouting razor-fish. I made collections of shells, such as were cast ashore, some so small that they appeared like white specks, some so small that they appeared like white specks in patches of black sand. There was a small pier on the sands for shipping limestone brought from the coal mines inland. I was astonished to see the surface of these blocks of stone covered with beautiful impressions of what seemed to be leaves; how they got there I could not imagine, but I picked up the broken bits, and even large pieces, and brought them to my repository.”

Mary Somerville, Architect Rational, (1780-1872) was an innovative and talented science communicator, with an extraordinary (and mostly self taught) grasp of mathematics in an era when most women had no access to formal education. As a direct result of her work, calculus was introduced to the English speaking scientific world, the idea of physics (as a single subject containing topics such as optics, thermodynamics and astronomy) was invented, and the term “scientist” was coined to describe people who studied the various sciences.

Moreover, Somerville’s writing influenced James Clerk Maxwell.  Maxwell characterized Somerville’s period as one in which a widespread desire existed “to be able to form some notion of physical science as a whole”. He commented: “The unity shadowed forth in Mrs Somerville’s book is therefore a unity of the method of science, not a unity of the process of nature”

At the age of 13 her mother sent her to writing school in Edinburgh during the winter months, where she improved her writing skills and studied the common rules of arithmetic. Back in Burntisland she taught herself enough Latin so that she could read the books in the home library.

Somerville was passionate about astronomy and believed it to be the most extensive example of the connection of the physical sciences in that it combined the sciences of number and quantity, of rest and motion.

“In [astronomy] we perceive the operation of a force which is mixed up with everything that exists in the heavens or on earth; which pervades every atom, rules the motions of animate and inanimate beings, and is as sensible in the descent of a rain-drop as in the falls of Niagara; in the weight of the air, as in the periods of the moon.” –Mary Somerville

Architect Rationals need not be thought of as only interested in drawing blueprints for buildings or roads or bridges. They are the master designers of all kinds of theoretical systems, including school curricula, corporate strategies, and new technologies. For Architects, the world exists primarily to be analyzed, understood, explained – and re-designed. External reality in itself is unimportant, little more than raw material to be organized into structural models. What is important for Architects is that they grasp fundamental principles and natural laws, and that their designs are elegant, that is, efficient and coherent.  [Please Understand Me II]

During an unhappy first marriage, Mary had taught herself mathematics and had studied both astronomy and painting. Mary and her husband, Samuel Greig, lived in London, but it was not a happy time for Somerville. Although she could study, her husband did not think much of women’s capacity to pursue academic interests. Indeed, Greig “possessed in full the prejudice against learned women which was common at that time.”

When her husband died in 1807, while she was still nursing their youngest child, she returned home to Scotland.

Back in Scotland she resumed her mathematical studies. By that time she had studied plane and spherical trigonometry, conic sections and James Ferguson’s Astronomy. Now she first read Isaac Newton’s Principia, which she continued to study.   Her inheritance from Greig gave her the freedom to pursue intellectual interests. John Playfair, professor of natural philosophy at University of Edinburgh, encouraged her studies, and through him she began a correspondence with William Wallace, with whom she discussed mathematical problems. She started to solve mathematical problems posed in the mathematical journal of the Military College at Marlow and she eventually made a name for herself when solving a diophantine problem for which she was awarded a silver medal in 1811.

She first visited the Herschels’ telescopes at Slough in 1816. She described herself as “intensely ambitious to excel in something, for I felt in my own breast that women were capable of taking a higher place in creation than that assigned to them in my early days, which was very low”.

In 1828, she was challenged by Lord Brougham to produce a popular summation of the new French astronomy for his philanthropic Society for the Diffusion of Useful Knowledge. After immense and covert labour (“I hid my papers as soon as the bell announced a visitor, lest anyone should discover my secret”), she completed an outstanding translation and interpretation of Laplace’s difficult astronomical book on the structure and mathematics of the solar system, retitling it The Mechanism of the Heavens (1830). Her unscientific friend, novelist Maria Edgeworth, described Mary admiringly: “She has her head in the stars, but feet firm upon earth… intelligent eyes… Scotch accent… the only person in England who understands Laplace.”

Ruthless pragmatists about ideas, and insatiably curious, Architects are driven to find the most efficient means to their ends, and they will learn in any manner and degree they can. They will listen to amateurs if their ideas are useful, and will ignore the experts if theirs are not. Authority derived from office, credential, or celebrity does not impress them. Architects are interested only in what make sense, and thus only statements that are consistent and coherent carry any weight with them. [Please Understand Me II]

She was the first person to sign John Stuart Mill‘s unsuccessful petition for female suffrage.  In her autobiography, Somerville wrote that “British laws are adverse to women”.  She detailed the obstacles she had faced in obtaining an education as a young girl.